What I learned at the world’s highest floating solar installation

The small town of Walden, Colorado is home to the world’s highest-altitude solar installation. We paid them a visit because we had a very important question. How does the harsh weather impact the floating solar array?

The town of Walden may look like any other small town on the US prairie surrounded by grassland almost as far as the eye can see, but don’t be fooled, it’s located at a high-altitude in the Rocky Mountains. In fact, we are at almost 2,500 meters above sea level. Despite my visit coinciding with a nice summer day of 25 degrees Celsius, the altitude makes its mark on the climate. Walden averages only just over 40 days a year without frost(!).

So why is there a floating solar installation in this town of 600 people with such harsh weather? To find out we paid a visit to Walden’s mayor, Jim Dustin.

“I didn’t think it was novel, floating solar just made a lot of sense.” - Jim Dustin, Walden Mayor

The 74 kW installation is made up of Ciel et Terre’s Classic Hydrelio floats with 208 Jinko 355W panels, covering an area of 1,320 m2 which equates to 52% of the settling pond. At peak yields in the summer months, the installation generates 100% of the power consumed by the water treatment plant.

But by coming all the way to Walden, my main goal was to understand how the installation performs in the harsh winter conditions. Walden receives on average 160 cm of snow and can get temperatures as low as -44 C.

So how was the installation performed? I spoke to Rowena Adams (Patawaran) from Johnsons Controls to understand better.

“The mooring lines froze into the ice the first winter,” Rowena told me. This caused stress on the floaters. However, once the temperature grew warmer it thawed without any apparent structural damage. Ciel & Terre later came and put the mooring lines on floaters to prevent them from freezing next winter, which seemed to have worked, according to Rowena.

And what about the snow?

“The wind blows much of the snow away, especially if it’s only a few cm of light snow,” Rowena explained. “But the first year, we got 2 feet (60 cm) of snow in just 24 hours, so that was more of a challenge.” However, while Colorado might experience some fierce winter weather, it is in fact the sunniest state in the US so after a harsh winter storm, the sun comes out and melts much of the snow, thereby reducing some of the need to clean the panels off.

“We considered increasing the tilt of the panels to let more of the accumulated snow more easily slide off, but retrofitting the installation was prohibitively expensive and Covid also made the work harder to undertake. It would also mean increasing the distance between the panel rows, which was harder given the small size of the pond. Given the altitude we get very good production in the six summer months, but in the three winter months, we have to rely on grid electricity to power the water treatment facility.”

Rowena told me that ice was a bigger concern than snow, and especially when it comes to the longevity of the HDPE modules over time. They were worried about ice potentially puncturing the floats, but that has not happened so far, even when the floaters were slightly embedded in the ice. “What has probably helped us is that when it gets cold, there is very little wind, meaning the movement of the array is marginal. A lot of movement in the ice could be very challenging.”

I also had to ask - what are your tips to others who are looking to build floating solar in cold conditions?

“Know the dynamics of the water body. If it’s a water treatment plant, you need to know how often the pond is used and how the water surface levels vary over time. Any changes in the water levels will affect the anchoring and mooring. For us the assumption was that in the winter no water would be released into the pond that would vary the pond levels significantly, but there was a unique circumstance making it not to be the case, which caused stress on the mooring. And no matter what type of water body you’re dealing with, you need to know the local conditions and the climate conditions including potential extreme weather.”

Given the success of the Walden installation, the State of Colorado and other public and private entities in the US are actively developing floating solar projects.

Despite reports that the Swiss mountain village of Bourg-Saint-Pierre has the world’s first high-altitude floating solar park, this award actually goes to the town of Walden in Colorado which was both first and higher. Congrats, Walden!

Are you looking for better early-phase insight for your floating solar project? Get in touch with us at Glint Solar. 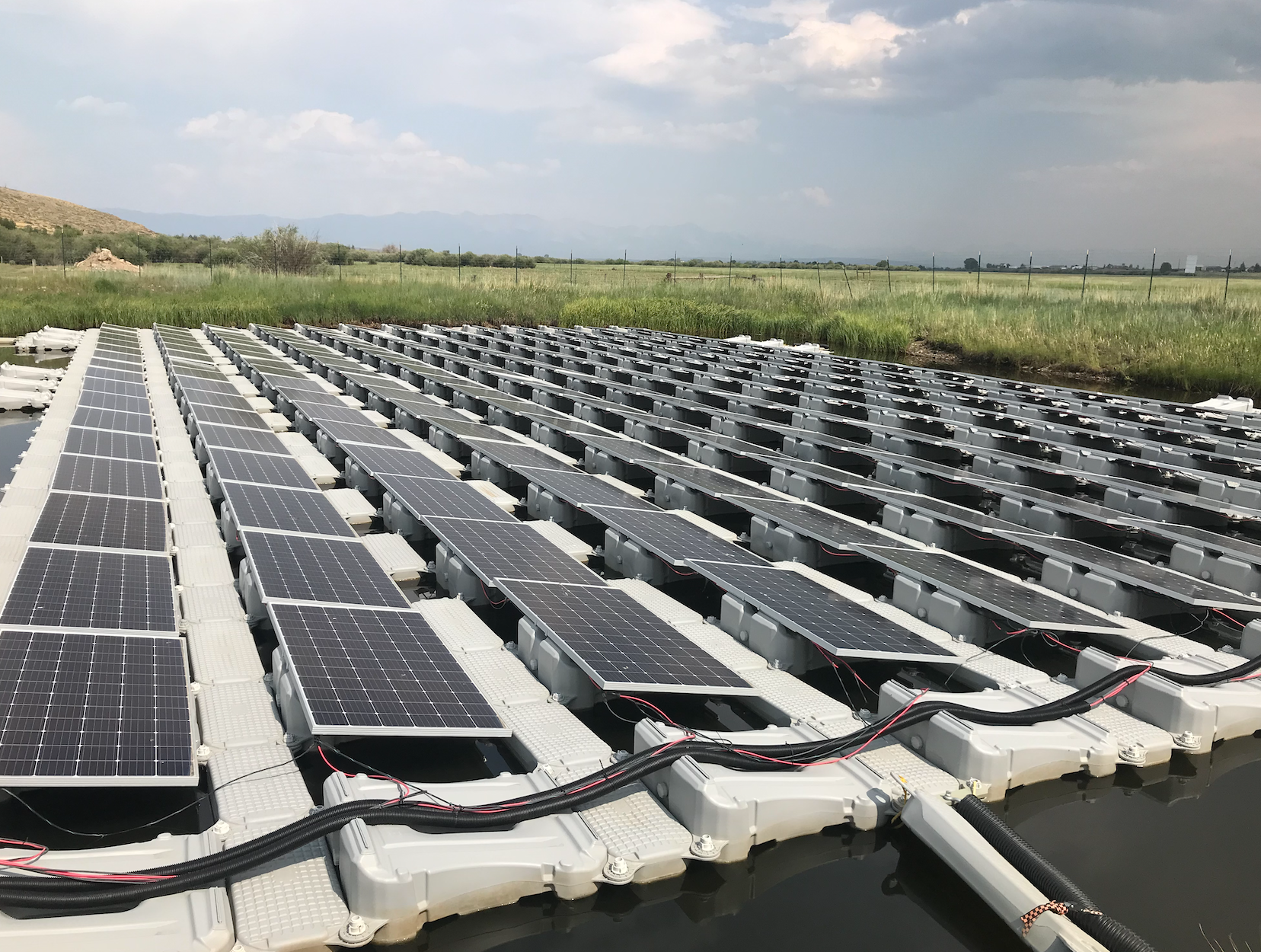